NHC News (Congrats to our students!)

NorCal House of Chess
” Home of the Champions “
#1 Chess Club in the US (voted by USCF)
We train the best kids in Northern California! We’ve produced several State/National/International Champions! Whether your kid is a beginner or an advanced player, we can train your kid!

BIG CONGRATULATIONS TO NHC student Yesun Lee. She won the Gold Medal at the North American Youth Chess Championships in Canada. She earned a title Woman FIDE Master. Yesun has attended several special group classes at NorCal and was taught by Coach Ted Castro. She also goes to Weibel Elementary and trained by coaches from Weibel Chess.

NORCAL kids won the Team Championships for the K-6 Varsity, K-5 Varsity and the Kindergarten section!!!

KUDOS to NORCAL HOUSE OF CHESS students who dominated the recently-concluded National Junior Congress last January 21 & 22 in Livermore. In the team competition, we won 4 National Championship Team Titles (4 out of 6 sections that we participated in!).

In the TEAM competition, NHC students won the following divisions:

CONGRATULATIONS TO ALL OF YOU! AWESOME JOB!

A special SHOUT OUT to ASHLEY PANG who tied for 1st place and earned a title Woman Candidate Master at the North American Youth Chess Championships (NAYCC) in Windsor, Canada!

Congratulations to our very own, NHC home-grown student, Woman International Master Ashritha Eswaran who had an impressive performance at the recently concluded US Womens Championship that was held in St. Louis, Missouri. She scored a remarkable 5.5 points (highest among the superstar youngsters) drawing against GM Irina Krush (7-time US Women&#39;s Champion) and winning a crucial game in the last round against the tournament leader, WGM Tatev Abrahamyan. Despite being the lowest-rated in the tournament amongst the best female players in the country, she got 7th place and won $5,000! Kudos Ashritha!

We are so proud of you! WIM Ashritha Eswaran tied for 3rd place (4th in tie-break) at the Pan American Championship (u-20) in Colombia, June 2016. She defeated the tournament leader in the last round, finishing an impressive 6.0/9.0. YAY ASHRITHA!!!

Congratulations to NorCal House of Chess student IM Vignesh Panchanatham for winning the K-12 National High School Championships in Atlanta. There were 6 of them who shared 1st but Vignesh got a better tie-break. Another former NHC student, IM Kesav Viswanadha, also tied for 1st place. Congrats to both of you!Kudos to Vignesh’s team, Harker School, for winning the team championship as well. Another former student, NM Michael Wang was also part of the team who participated.
U.S. Amateur Team West Tournament
NorCal House of Chess tied for 2nd place. After tie-breaks the two teams who competed which composed of NHC coaches and students ended up in 3rd and 4th place!
NorCal House of Chess team won the top Chess Club award!
NorCal House of Chess would like to say “GREAT JOB!” to our very own NHC student/member, Pranav Sairam, for winning first place in the 8 & under section at the 2016 US National Junior Chess Congress! NorCal House of Chess also took home TWO 1st place team trophies in the 16 & under and 8 & under categories. Congratulations to all our members who participated this past weekend!
NorCal House of Chess is excited for 2016, the year 2015 has been a great experience for us.Here’s what we’ve accomplished:
CONGRATS to NorCal House of Chess Kids for winning 1st place (5th graders) at the State Championships!
NHC Members: Jacob Han, Atul Thirumalai, Arya Bhat, and Anish Korlimarla
2nd Place for the team section in the 3rd & 4th grade sections!Kindergarten: Asa Liu, 2nd place
1st Grade: Shaurya Palusa, tied for 3rd place
3rd Grade: Pranav Sairam, 2nd place
Allyson Wong, tied for 4th place
5th Grade: Oliver Wu, 1st place
Jacob Han, 2nd place
6th Grade: Aaron Lee & Stanley Ko, tied for 1st
8th Grade: Ronit Pattanayak, 2nd place

CONGRATULATIONS NHC FOR WINNING THE 2015 CHESS CLUB OF THE YEAR FROM USCF !!!

United States Chess Federation (USCF) has selected NorCal House of Chess as 2015 Chess Club of the Year. We are honored to receive such esteemed recognition. We would like to give thanks to all our loyal members, great coaches, wonderful parents, awesome students and everyone who has been part of NorCal House of Chess in one way or another. We share this award to all of you.

NORCAL HOUSE OF CHESS wins USAT National Amateur Championships (again!)
NorCal House of Chess did it again! They beat Pinoy Revamp (USATN Champions) in the playoffs (3-1) to face EAST in the Finals. They beat Virgnia Assassins in the finals with a score of 35.-0.5. NorCal House of Chess Team is composed of coaches & one student. They just made history by winning 3-years in a row! Kudos to NorCal House of Chess Team!
NORCAL HOUSE OF CHESS TEAM
Board 1: GM Enrico Sevillano
Board 2: IM Ricardo De Guzman
Board 3: FM Ronald Cusi
Board 4: Ronit Pattanayk
Alternate: Evan Vallens
Team Captain/Coach/Manager: Ted Castro 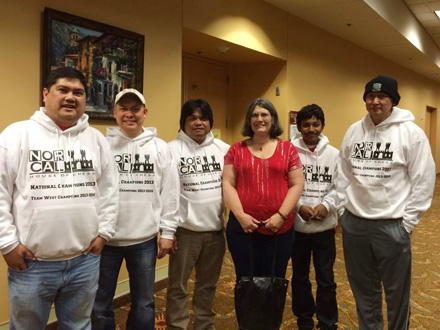 A. NORTH AMERICAN YOUTH CHESS CHAMPIONSHIP (NAYCC)  IN MEXICO (MAY, 2015)
Congratulations to WFM Joanna Liu for winning the Gold Medal at the NAYCC in the Girls u14. She also earned a Woman Fide Master Title!

B. U.S. GIRLS JUNIOR CHAMPIONSHIP IN TULSA, OKLAHOMA.
Congratulations to National Master Ashritha Eswaran for winning the US Girl’s Junior Championship which was comprised with some of the girls in the country. She was the lowest rated in the competition and still came out on top. With the win, she gets a seat at the US Women’s Championship in St. Louis next year and also represent US for the World’s Junior Girl Championship in Russia.
C. PAN AMERICAN YOUTH CHESS CHAMPIONSHIP IN CALI, COLOMBIA
Amazing week for NorCal House of Chess students. These kids represented team USA at the Pan American Youth Championships in Cali, Colombia. WCM Aksithi Eswaran won the Gold Medal by winning all her games (9.0/9.0) in the Girls u10 secion. Her sister, NM Ashritha Eswaran, played 2 sections up, tied for 1st place and brought home the Bronze Medal. She also earned a WFM title and WIM norm, Lastly, Chenyi Zhao, playing in the Girls u12, tied for 2nd place and got the Bronze Medal.
D. PAN AMERICAN CHAMPIONSHIPS UNDER 20 in San Salvador, El Salvador

WIM Ashritha Eswaran scored 7.5 points to win the Pan American Championship Girls U20 in El Salvador. With the win, she earned an outright Woman International Master title and a Woman Grandmaster norm. This girl can’t seem to be stopped!